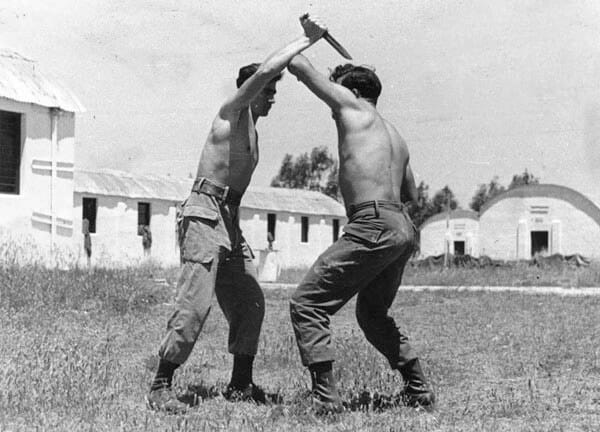 Krav Maga was developed in Czechoslovakia in the 1930s by Imi Lichtenfeld, also known as Imi Sde-Or (Sde-Or–”Light Field”–a calque of his surname into Hebrew). He first taught his fighting system in Bratislava in order to help protect the local Jewish community from the Nazi militia.

Upon arriving in the British Mandate of Palestine, Lichtenfeld began teaching Kapap to the Haganah, the Jewish underground army. With the establishment of the State of Israel in 1948, Lichtenfeld became the Chief Instructor of Physical Fitness and Krav Maga at the Israel Defense Forces (IDF) School of Combat Fitness. He served in the IDF for 15 years, during which time he continued to develop and refine his hand-to-hand combat method.

In 1964 he left the military though continued to supervise the instruction of Krav Maga in both military and law-enforcement contexts, and in addition, worked to refine, improve and adapt Krav Maga to meet civilian needs.

Expansion to the USA

Prior to 1980, all experts in Krav Maga lived in Israel and trained under the Israeli Krav Maga Association. That year marks the beginning of contact between Israeli Krav Maga experts and interested students in the United States. In 1981, a group of six Krav Maga instructors traveled to the US to demonstrate their system, primarily to local Jewish Community Centers. The New York field office of the FBI and the FBI’s main training center at Quantico, Virginia saw it and expressed interest. The result was a visit by 22 people from the US to Israel in the summer of 1981 to attend a basic Krav Maga instructor course. The graduates from this course returned to the US and began to establish training facilities in their local areas. Additional students traveled to Israel in 1984 and again in 1986 to become instructors. At the same time, instructors from Israel continued to visit the US. Law enforcement training in the US began in 1985. Krav Maga is currently being taught as a primary hand-to-hand combat technique at some police departments in the United States.

Expansion to other Countries

Krav Maga has been growing in popularity over the last several years with more schools opening up the UK, France, Spain, Germany, Italy and a number of other European countries as well as places like Australia and South America. Krav Maga’s growing popularity is due to a number reasons; organizations such as the KMG, FEKM (European Federation of Krav Maga) IKMF and have been promoting it a lot across Europe and various other parts of the world. Films and TV shows such as 24, Taken, NCIS and Archer are known to feature it in the show. Krav Maga being utilized by a number of professional organizations such as the IDF, Mossad, Shin Bet, FBI, and DEA has led to increased popularity with civilians also.

Taking preventative measures comes first. Be aware and avoid violence. You can prevent yourself from getting into a danger zone by keeping your eyes and ears open. If you see a problem around you, stay away. If you have no choice then a kick to the groin, spitting, biting, gouging and hair pulling are all very legitimate. Never escalate the situation and remember; fighting is the last resort.

However, if you must fight, then follow these rules: